Twins are very special. Special because of the connection they have, mentally and physically, and if we think a little about some interesting facts, this subject becomes more and more interesting. Did you know that the DNA of identical twins is 99.9% the same? Also, there were cases where they weren’t born on the same day, but 84 days apart. Some twins have such a special connection that there were cases when twins were thinking about the same thing at the same time, or feeling the same emotion, doing the same thing. Fascinating, isn’t it? Well, there are some special cases when they are born conjoined, when they are physically connected to each other. These are very rare cases, and twins’ lives are at risk because of the organs that can be joined as well, which can cause serious complications.

Bella and Abby were conjoined twins and even if they don’t remember that anymore, they still have that strong connection between them. They remained in the hospital for another 6 months after birth, because their organs were twisted together. This condition is very rare and if you wanna know some numbers such a case can occur once in every 60,000 births. It was difficult for them at the beginning, because their life was threatened by the fact that they were joined in the chest and belly areas.  It was a real challenge for the doctors and they had to take a risky decision, and after the parents agreed, they began the surgery, considering that it was their only chance to survive. Seemed like a double trouble at first, but because of their expertise and devotion, the surgery will be a success. 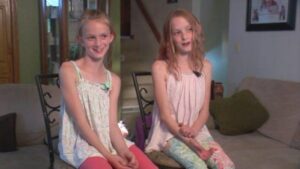 On May, 12nd 2006 the surgery took place, seventeen doctors participated and the procedure lasted twelve hours. During all this time, the parents were anxious and prayed continuously for their two little angels. The surgery was a great success and in less than half a month, the family returned home.

Ten years after the surgery, the girls are perfectly healthy and super active. Abby and Bella are practicing gymnastics in order to channel the huge amount of energy they have. They love the fact that they can play together and it’s like they are in constant competition. More than that, they discovered that they share some telepathic abilities, and they realized that when the girls surprised each other thinking at the same thing or understanding each other without expressing themselves verbally.

We are so happy to know that Abby and Isabelle have a beautiful life and can enjoy it to the fullest. Both of them have a necklace with a message that really express their story: “One in a million”. And for sure, these sweet girls are one in a million. Their parents are so proud and happy to see their baby girls healthy and playing all day. Let’s share this story and let us know what you think!